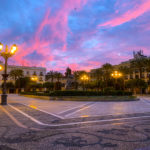 Jerez de la Frontera is the city of flamenco, horses, sherry wine and motorcycles. It lies in the southwest of Andalcía. Locals usually call it in the short form, Jerez. With a pleasant climate, this city has a lot to offer for travelers who want to feel an authentic southern Spain. And out of all the cool experiences, we´ve selected 15 things to do in Jerez for you.

Among the labyrinthine and narrow streets in the city center, the Alcázar stands out in a strategic position. Built in the 12th century, it is the oldest building in the city. Besides, it is one of the most well-preserved Moorish Fortresses in Andalucía.  Its octagonal tower is typical of Almohad-era forts.

The geometric flower beds, fountains, and the Arab baths are pretty worth a visit inside the Alcázar.

2.The Cathedral of Jerez

Right by the side of the Alcázar, among the exotic palm trees lies the Cathedral. It is built on the remains of an old mosque in the 17th century. This building presents a mixture of Gothic, Baroque and Neoclassical styles. Together with the Alcázar, it is undoubtedly one of the best places to visit in Jerez de la Frontera.

3.Sherry tasting in a winery

If we have to pick one thing Jerez is famous for worldwide, it has to be its wineries. Wandering around the city, you could tell there are plenty of them simply by the smell of wine on the street. For wine lovers, Jerez is a little paradise. The famous sherry wine made in Jerez has different typologies: fino, oloroso, amontillado, etc. Visiting a winery should be on your list of 15 things to do in Jerez. During the tour, you will know to differentiate between these sherries.

4.Taste some Tapas in a tavern

A very local way to enjoy Jerez´s gastronomy is by doing a tabanco hopping at night.

First, before going out on this tapas tour, let´s get an idea of what a tabanco is. Back in the 17th century, tabancos were sherry stores where people went to buy bulk wine. While as time went by, these tabancos transferred to trendy bars.  People could go there to sip some sherry, get some nice tapas, and spend some good time with friends.

Some of our favorite tabancos are El Pasaje, Plateros, La Cruz Blanca and San Pablo. And some of the most typical tapas you don’t want to miss out on are Papa Aliñás, Tortillas de Camarones, payoyo cheese and Chicharrones.

Jerez de la Frontera is one of the cities in Spain where horses enjoy tremendous prestige. The Carthusian horse, began to be raised back in 1484. It represents the elite of the Pure Spanish Breed. Thus, going to watch a horse dancing show is a must. Dressed in costumes of the 18th century, riders will come out with their horses accompanied by beautiful Spanish music. Both the riders and the horses are highly skillful. And during the equestrian ballet, there will be eight different choreographies in each show.

6.Get lost in San Miguel district

If flamenco is the icon of Jerez, then San Miguel will be the district that best represents this icon. And to feel the breath of this Andalusian city, there is no better way than getting lost in San Miguel. Surrounded by old buildings of traditional Andalusian architecture, popular local taverns and full of exquisite patios decorated with flowerpots, San Miguel fits perfectly with what you picture about Southern Spain.

7.Take a selfie with Lola Flores

Right in the center of San Miguel, a young lady dances all day among the orange trees. Her name is Lola Flores, a Spanish singer, flamenco dancer and actress.

She was born in this flamenco neighborhood, only several meters away from where the famous singer Antonio Chacón lived. As a singer and dancer, she has influenced generations of people in Spain and worldwide. And as an actress, she interpreted more than 35 films, most of which being flamenco-related.

As a tribute and memory of this talented lady, the city of Jerez lifted a statue of Lola Flores in the San Miguel neighborhood.

Since we are already in the San Miguel neighborhood, strolling around, we will encounter the San Miguel Church. It was built between the 15th and 18th century. And the tower of the church is the highest point of the city. With a fine mixture of gothic, renaissance and baroque styles, this church was declared a National Historic-Artistic Monument in 1931.

Wandering around in the city of flamenco, you are fascinated by the San Miguel neighborhood, and you’ve got a selfie with Lola Flores. So the only thing left is a live flamenco show, which should sit on the top of the 15 things to do in Jerez. Distributed in the historic center of Jerez are many tablaos where top-level artists bring their passion to the public. The shows often take place on weekends, though some tablaos also work during the week.

To the surprise of many of us, Jerez is also a city of palaces besides its deep-rooted flamenco culture. In the 17th century, there were about 800 noble families in possession of great fortune in Jerez. Nowadays, some of their palaces have been reformed and well preserved. For instance, Palacio de Campo Real, Palacio Riquelme, and Palacio Virrey Laserna, along with many other magnificent palaces, are Jerez’s hidden jewelries. Visit one of them and peek into how the aristocratic life was back in the days.

Walking in the center of Jerez, the Plaza de la Asunción is an eye-catcher with its mixture of architectural styles. On the south side of the plaza lies the old town hall. Built in the 16th century, it represents one of the greatest examples of Renaissance architecture in Andalucía. And turning to the east side of the plaza, you will be facing the delicate Mudéjar style door of the San Dionisio Church.

Plaza de la Asunción is an important meeting point for locals. Get yourself a coffee and let the time flow. Isn’t it the spirit of Andalusian life?

12.Enjoy every minute in the Museum of Time

There are only two museums dedicating exclusively to historical clocks in Spain: the Grassy Museum in Madrid and the Museum of Atalaya in Jerez. This museum of time preserves a collection of 287 watches made between the 17th and 19th century.

One of the most remarkable ways to feel the rhythm of a place you visit is by doing some grocery shopping. And in Jerez, this place would be the Mercado Central de Abastos, situated in the city’s heart. The market locates in a neoclassical architecture built in 1885 by José Esteve.

Every day, a wide variety of seasonal products come to this market. Among the stands outside the building, you could find local farmers bringing in recently picked vegetables. While inside, the seafood section offers plenty of fishes, shrimps and seashells freshly brought in from the Cádiz Bay.

Go check out the market in the morning! It´s going to be the most peculiar one in your list of 15 things to do in Jerez.

Jerez has countless excellent restaurants for you to have a taste of the Andalusian flavor. Lying across the center, Consistorio Street is the most aromatic pedestrian street in town. Numerous restaurants and bars fulfill this street with cute terraces and umbrellas and a great variety of local dishes they serve. Mesón del Asador, La Cruz Blanca and Albores are highly recommendable without thinking!

15.Go on an excursion outside Jerez

As a city situated prestigiously in the middle of the Province of Cádiz, Jerez is pretty close to other towns and cities. El Puerto de Santa María is only 10 minutes away by train. And to go to the capital city Cádiz it takes 45 mins by car. Heading north, Sevilla is within 1-hour by car. And towards the west, Sanlúcar de la Barrameda is quite close as well. Either you are a beach lover or a mountain expert, Jerez would be a strategic starting point of a one-day excursion outside town.

How do you like these 15 things to do in Jerez? If you have extra time and are curious about other cool places to go in Jerez, just send us a message! To enjoy Jerez and Cádiz the way you want, we could tailor-make your trip!