Traditional Spanish breakfast varies by region, but tostada, bocadillos, and churros con chocolate are two of the most popular options. Churros with hot chocolate, on the other hand, are largely for visitors, as few Spaniards eat them for  breakfast.

In this article we are going to look at some of the most popular breakfast items that you can find in most Spanish cafeterias (although note to look out for the ‘Churreria’ sign if you want to sample churros).

A tostada or bocadillo – a baguette sandwich with various ingredients including Spanish eggs, cold meats, sausages, or grilled vegetables – is a staple breakfast in Andalusia. There is no such thing as a classic bocadillo because each café creates its own version.

Andalusians usually start their day with a hearty and filling breakfast (el desayuno.) ‘Tostada Con Tomate Y Aceite’ – toast with tomato and olive oil – is a traditional breakfast in Andalusia.

You’ll get a tostada (sliced toasted bread), a small dish of freshly pulped tomatoes, a bottle of olive oil, and some salt if you order this in a bar or cafe.

Drizzle the olive oil generously over the toasted baguette, then top with the freshly pulped tomato and season with a pinch of salt.

Tostada Con Tomate Y Aceite is typically served with fresh orange juice and/or coffee. The cost is usually a few euros, which is good value because it fulfills hunger pangs.

Pitufo is a small-sized bread that is toasted with oil in the morning or used in a sandwich with any other component. It’s a Malaga specialty, especially the mixed version, which includes cooked ham and cheese. If you drink coffee with it, you’ll have all the energy you’ll need till midday. You may order it in any café in Malaga to have the most authentic Malaga flavor.

This breakfast is not as healthy as the others, but it is 100% native to Andalusia and is worth treating yourself to at least once a week. The churro is a wheat flour dough that is baked in oil and is a food of the “frying pan fruits.” We Andalusians frequently dip them in chocolate, and the flavor is so well-known that it has been imported to many places throughout the world, including London, New York, and Tokyo. 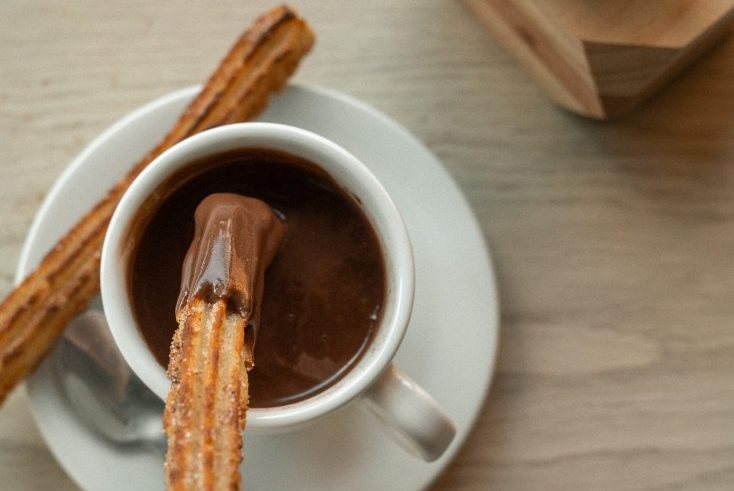 If we are already in the heart of Andalusia, the traditional breakfast for hard work, such as farming, is toasted bread with “colorá” butter, which is lard flavored with paprika, bay leaf, and oregano, among other things. A strange flavor that will surprise you and will not leave you indifferent, albeit you should only eat it once a week if you have high cholesterol.

For those confused, pringá is a stew meat and cabbage mincemeat cooked with brisket, bacon, poultry, lean meat, bacon, black pudding, and anything else that has been dropped into the pot! Pringá is served in crumbly bits and “pringan” crispy, freshly cooked toast, and it’s as addicting as it is wonderful. Then you add it to the toasted bread and the result is a delicious breakfast.

The base of these toasts is the zurrapa de lomo. It is a spreadable product made from strands of fried loin and Iberian pork lard. Besides, it is a typical and traditional product of the Malaga mountains. Moreover, it has an intense flavor and an important point of seasoning, so what the company it carries is aimed at softening it a bit and giving it a very pleasant counterpoint.

In Andalusia, a favorite breakfast is bread toast with tomato, ham, and olive oil.

To prepare the tomatoes, just cut them in half and shred them into a bowl. The fact that you only have the pulp and not the stem or skin.

Add roughly a tablespoon of extra virgin olive oil and a pinch of sea salt, then combine everything. Then, on top of the bread, spread the tomato mixture.

Then top it with Iberian ham, but you may use avocado, cheese, or whatever else you like.

The bread with oil and sugar is distinctive of Andalusia. Besides, it might be stated that it is a traditional snack and breakfast from a time when there were less sweets available and money was tight.

It is a breakfast that is still prepared in many Andalusian schools for the Andalusian community’s day.

If you want to know more about Andalusian gastronomy, dont forget to contact us in info@alsherry.com or on our website. We will be happy to help you!!