Located in the province of Cadiz, it is a site that absolutely takes your breath away. It is without a doubt one of the most picturesque of the Sierra de Grazalema’s Pueblos Blancos (white villages), if not all of Andalusia. Here are 10 things to do in Zahara de la Sierra.

Zahara de la Sierra is a very remarkable location. It is a fantastic site for sightseeing or hiking because it is located in the magnificent foothills of the Sierra del Jaral, within walking distance of Sierra de Grazalema Natural Park.

A little bit of history

It was a key Moorish outpost with the ideal location for a stronghold. At the time, the Nasrid border was a complex network of watchtowers and strongholds. Besides, they were visually linked to one another and ran the length of the Muslim Kingdom’s frontier. Between 1407 and 1483, Zahara was always on the front lines of conquests and reconquests.

Zahara was occupied by Christians from 1407 to 1481, when the village fell to the Nasrids. The fall of Zahara  was considered so significant. So, they used it as an excuse to start the War for Granada.

One of the principal castles that safeguarded Ronda and Malaga against Christian incursions was the castle at Zahara. Soldiers were the only people in the area at the time; there were no women or children.

Christian soldiers led by Rodrigo Ponce de León, the Marquis of Cadiz, finally seized the settlement in 1483, earning Rodrigo the title of “Marquis of Zahara.”

What to see there

The first thing you should do in Zahara de la Sierra, as in most of the pueblos blancos, is go on an informal walking tour of the old town, which was designated as a National Historic and Artistic Site in 1983.

The Plaza Mayor represents the town center. And the 16th century clocktower (Torre del Reloj). Besides, the lake and surrounding landscape from the adjoining mirador, provide magnificent views of the square.

Besides, most of the 16th and 17th century houses are attractively decorated with flowers in colorful pots, and the Puerta de la Villa is an important and photogenic spot.

The beautiful 13th century Nasrid castle located at the very top of the cliff is the first thing you’ll notice as you approach Zahara de la Sierra. The entire complex encompasses the ruins of a medieval village (known as “Villa Arabe” or “Villa Medieval”) that was abandoned in the 17th century and spans an astonishing 6 hectares at the town’s highest point.

The Torre del Homenaje is a historic military fortress. It now affords the greatest angle for views down over the lake and olive trees. And the several miradores spread over the slopes are highlights of the Zahara de la Sierra castle.

Although there is no entrance fee, the steep climb from Plaza Mayor will most likely take 10-15 minutes.

The picturesque Alameda de Lepanto viewpoint, located at the bottom of town just off the road from Olvera, provides the best perspective of Zahara de la Sierra itself. The image of Zahara spilling over the side of the mountain is well worth a trip. Besides, there is no entrance fee or designated observation platforms.

On Main Street, have a drink or a meal.

The main street of Zahara de la Sierra, Calle Ronda, is lined with places to rest, relax, and enjoy a drink or meal. There’s even a location in front of the Church of Santa Maria de la Mesa. Besides, you can have a good view of the City Council, church and fountain.

The main stretch of the street is just approximately 200 meters long. However, it contains about ten restaurants and bars, as well as an equivalent number of shops.

We recommend deviating a few meters before arriving to the Chapel of San Juan de Letrán to see the Clock Tower, another of Zahara de la Sierra’s most magnificent sights.

This 16th-century bell tower is the only one that survives from the old hermitage, and it gets its name from a pendulum clock that can still be seen atop some narrow spiral staircases.

The Clock Tower, which we previously stated, is connected to the Chapel of San Juan de Letrán, which was built in 1958 on the site of a prior hermitage of the same name.

This remarkable chapel features a colorful façade with a semicircular arch crowned by three belfries, each housing a bell, and a rare Baroque altarpiece with figures of saints from the 16th and late seventeenth centuries.

A trekking trail via the Garganta Verde, located just 5 kilometers away and regarded one of the most magnificent landscapes in the Sierra de Cádiz, is another thing to do in Zahara de la Sierra and its surrounds.

The trail, which travels through a narrow canyon carved by the waters of the Bocaleones stream over thousands of years, is only 2.5 kilometers long, but it can take up to 2 hours to complete due to its steep slope, making it a moderately tough walk.

In addition to the stunning scenery, you’ll have the opportunity to see one of Europe’s largest griffon vulture colonies while walking between vertical walls that can reach a depth of 400 meters.

Remember that you’ll need a permit to follow this route, which can be obtained at the Zahara de la Sierra Visitor Center, and that the gorge’s entrance is on the way to Grazalema, another of Cádiz’s most beautiful white villages, which is well worth a visit. 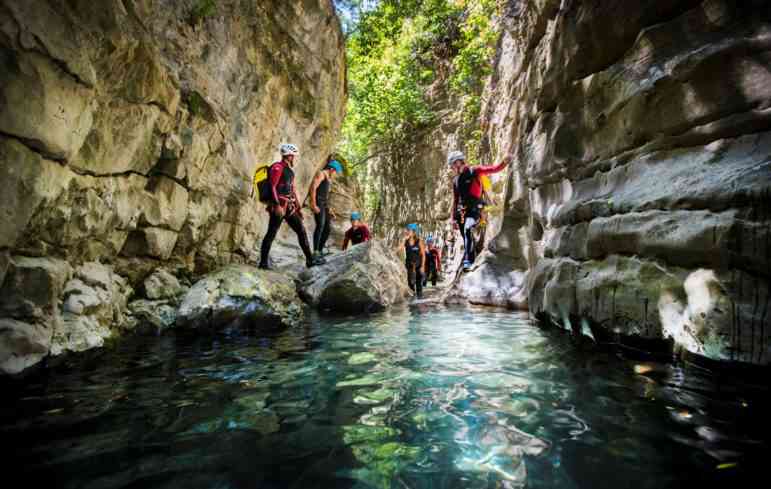 The Arroyomolinos Recreation Area, which includes an artificial beach known as La Playita, is located on an artificially extended stretch of the Guadalete River. The water, like the sights and the welcome relief from the summer heat, is real.

It is equally popular for hanging out or as a starting point for hiking or water activities. Besides, it is surrounded by the scenic Sierra de Monte of Zahara de la Sierra. Cueva del Susto, a fascinating cave with a restaurant, bar, and even lifeguards, is only a few minutes away on foot (in summer only).

The Via Verde de la Sierra is a mountain bike path that runs through the Sierra Nevada.

The award-winning Via Verde de la Sierra is Andalusia’s most well-known cycle route. It is undoubtedly a workout, with a distance of 36 kilometers and an elevation gain of almost 1,200 meters. There are no very steep sections.

Furthermore, the Via Verde de la Sierra,  is a minor stretch of the ancient rail line. It runs between Olvera and Puerto Serrano. You can do the walk in either way. If you start in Olvera, the trail is more downhill than uphill. You can also travel there and back, but you must be prepared for a hard day.

How to get there

Zahara de la Sierra is easy to reach by car from a number of Andalusia’s major cities.  Moreover, buses run between Cadiz and Ronda several times a day, stopping in Zahara. You can also reach most additional destinations by bus if you’re ready to swap at least once. It is only 45 minutes from Ronda, under two hours from Malaga.

Take the A-383 northeast from Arcos de la Frontera and follow the signs to Algodonales. When you get in town, take CA-531 south to Zahara de la Sierra, the most beautiful of the province’s walled hilltop pueblos. The journey time from Arcos is around 35 minutes, and the distance is 51 kilometers.

For more info and insights, get in touch with us here or write to us at info@alsherry.com and we’d be delighted to arrange / make plans with you or for you!